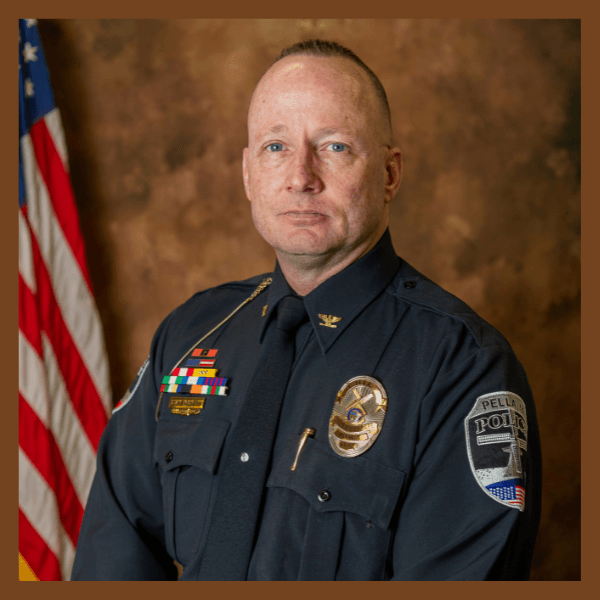 Chief Shane McSheehy is a proud member of the Pella Police Department and a veteran law enforcement officer with over 27 years of service. In 1993, he attended the Institute of Public Safety in Florida, where he graduated with honors. During his law enforcement career, Chief McSheehy has attended over 3,500 hours of professional development training. He earned his Master of Science degree in Criminal Justice Administration from Columbia Southern University and a Master of Science degree in Management and Leadership from Western Governors University. Chief McSheehy is a graduate of the 135th Administrative Officers Leadership Course from the Southern Police Institute at the University of Louisville and commissioned as an honorable Kentucky Colonel. Chief McSheehy completed the Executive Leadership Course through the University of Notre Dame Mendoza College of Business.

Chief McSheehy formerly served as a tactical operator for 22 years with over 12 years as the SWAT Commander. Throughout his career, Chief McSheehy has served not only as a Field Training Officer, task force operator, and Traffic Homicide Investigator, but has also supervised each of these specialized units. He has served in the Criminal Investigations Division as a property crimes detective, narcotics investigator, homicide investigator, Detective Sergeant, and Unit Commander.

Chief McSheehy has devoted much of his time in his career to training. He served as an adjunct instructor for the Lake County School Board and the Institute of Public Safety for 16 years. In addition to instructing new police academy recruits, Chief McSheehy also has instructed specialized and advanced training courses. He holds several certifications in training in areas of Firearms, Defensive Tactics, Active Shooter Instructor, Reality Based Training Instructor, and Taser. Chief McSheehy served as the Chief Operations Officer for U.S. Police Instructor Teams for 13 years. He has been involved in the tactical training and development of international police forces, as well as the dignitary and personal protection training of judicial, prosecutorial, and executive personnel. Chief McSheehy is an International Certified Instructor through the International Association of Directors of Law Enforcement Standards and Training (IDLEST). 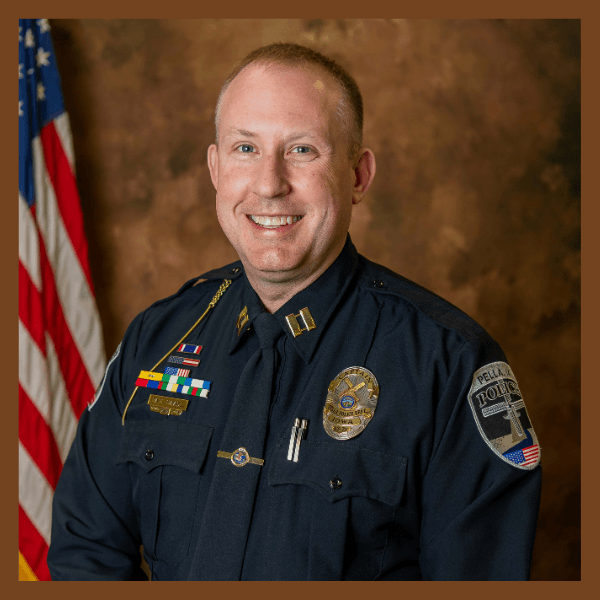 Captain Paul Haase began his career with the Pella Police Department in 2002. Prior to joining the Pella Police Department, Captain Haase was a member of the Iowa Army National Guard 186th Military Police Company beginning in 1996 and deploying to Iraq in support of Operation Iraqi Freedom in 2003. Captain Haase has held many positions within the department including patrol officer, narcotics detective, internet crimes investigator, precision driving instructor, anti-biased trainer, and field training officer. Haase was promoted to the rank of Police Lieutenant in 2011 and was promoted to Police Captain in 2020.

Haase earned his bachelor’s degree in Business Management from William Penn University and is a graduate of the School of Police Staff and Command at the Northwestern University Center for Public Safety.

To learn more about the various departmental divisions within the Pella Police Department, click the tabs below or view our organizational chart (PDF). 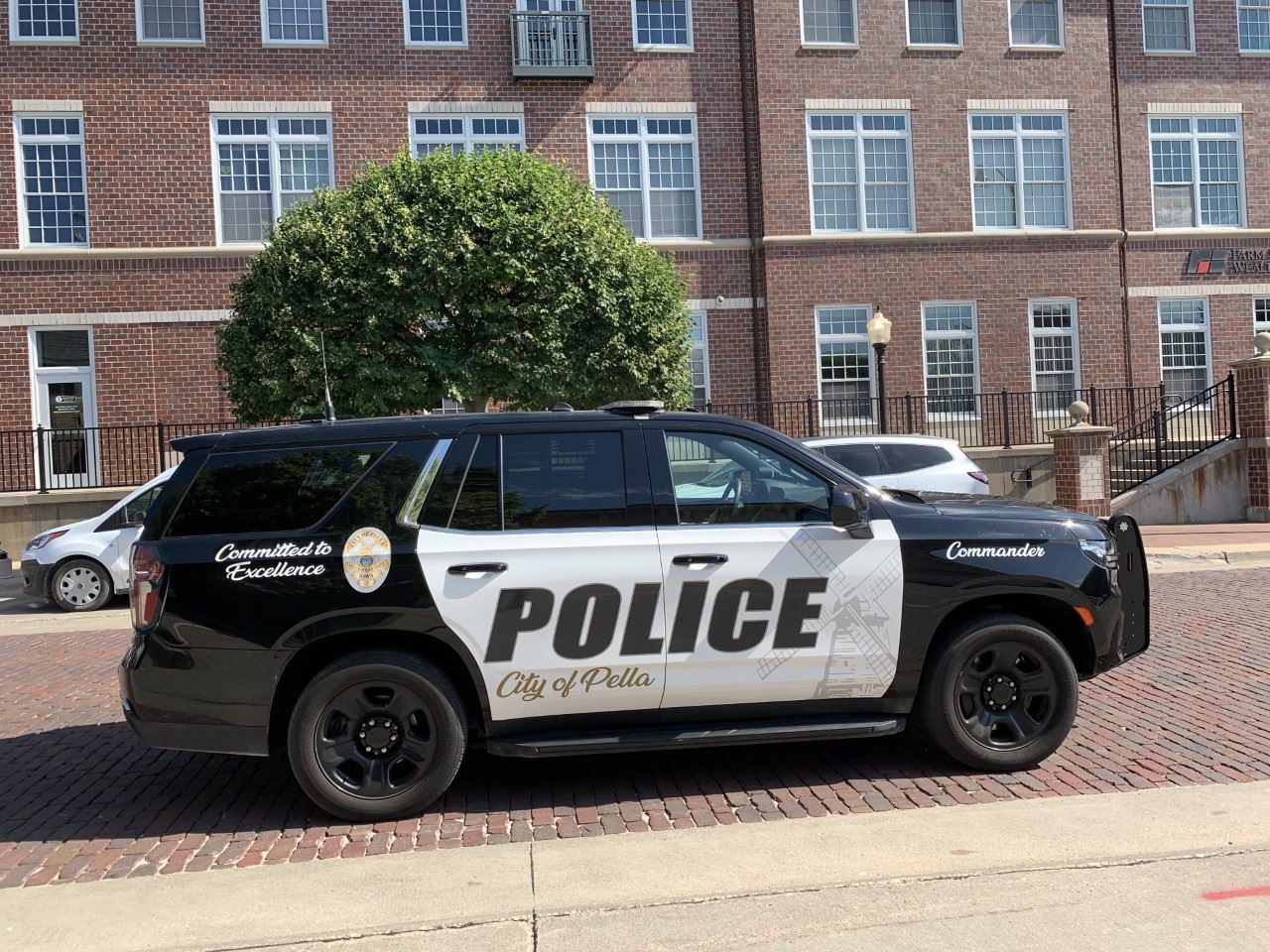 The Pella Police Department assigns a Sergeant to the Mid-Iowa Narcotics Enforcement Drug Task Force (M.I.N.E.) in the role of task force supervisor. M.I.N.E. consists of numerous jurisdictions working together to successfully investigate and prosecute narcotics offenses in Pella and Central Iowa.

The Pella Police Department’s School Resource Officer program consists of one officer who is assigned to work in Pella’s schools. This officer spends his time connecting with students and staff of the many school buildings in Pella to help promote a healthy relationship between the department and our youth.

The Pella Police Department is a member of the Central Iowa Regional Tactical Team (CIRTT). The CIRTT is committed to protecting and saving lives by maintaining and enhancing the member agency’s ability to respond to and neutralize special threat/response situations through ability and superiority in team training and cohesiveness, specialized tactics, superior marksmanship skills, and specialized equipment. 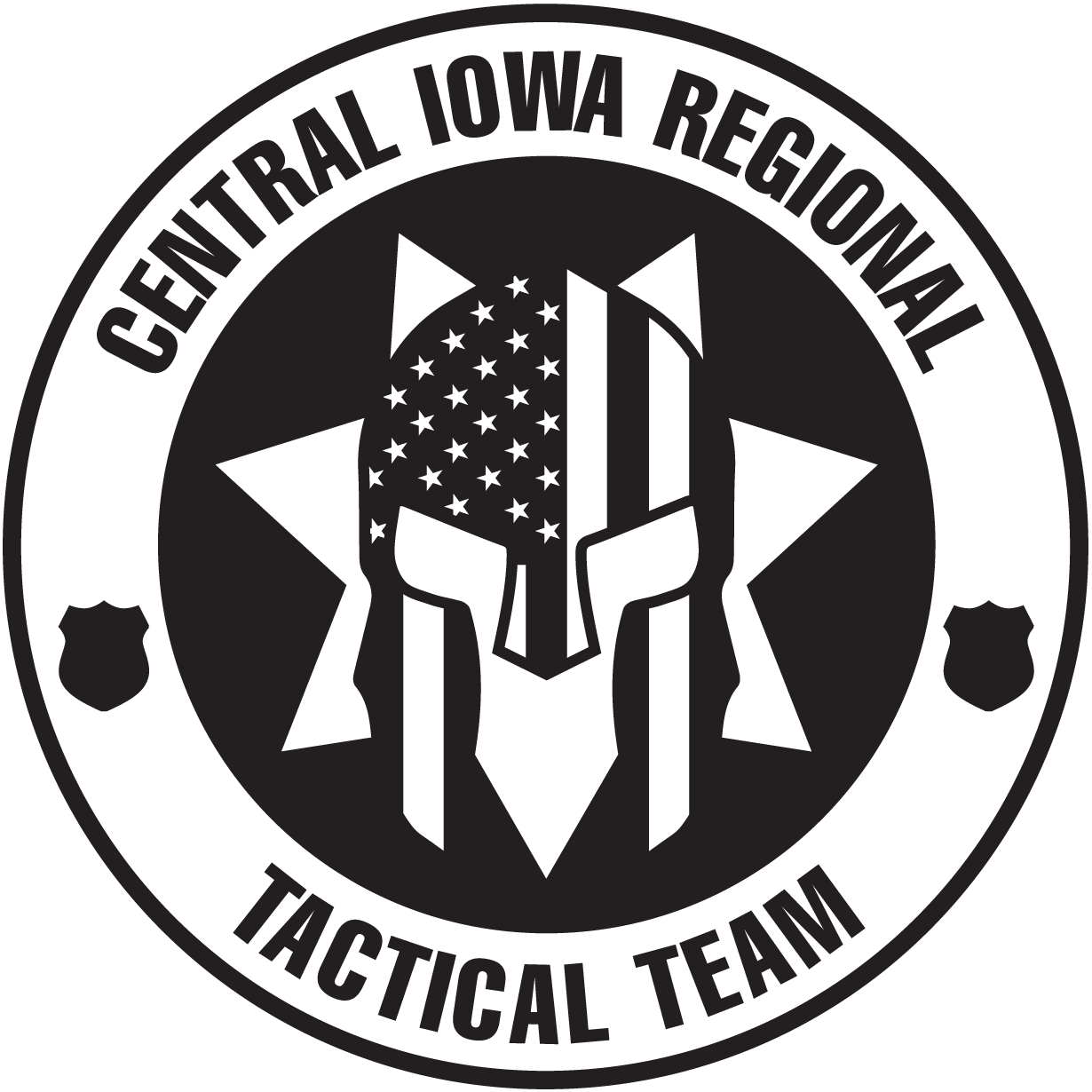 Each state is required to have a highway safety program directed by guidelines of the National Highway Traffic Safety Administration (NHTSA). The Iowa Governor's Traffic Safety Bureau (GTSB) is a subdivision of the Iowa Department of Public Safety (DPS) and fulfills this requirement.

The Pella Police Department enjoys a positive relationship with citizens and businesses. This bond is crucial in maintaining public safety by implementing effective and efficient policing as we are listening and valuing our communities’ concerns… we work together. The Pella Police Department celebrates this partnership by gathering stories, memorabilia, and items that honors our city, department, and persons who served with pride, integrity, and valor.

Please email Lt. David Beukelman if you have unique information or items to exhibit amongst our collection to educate the public and honor our past. 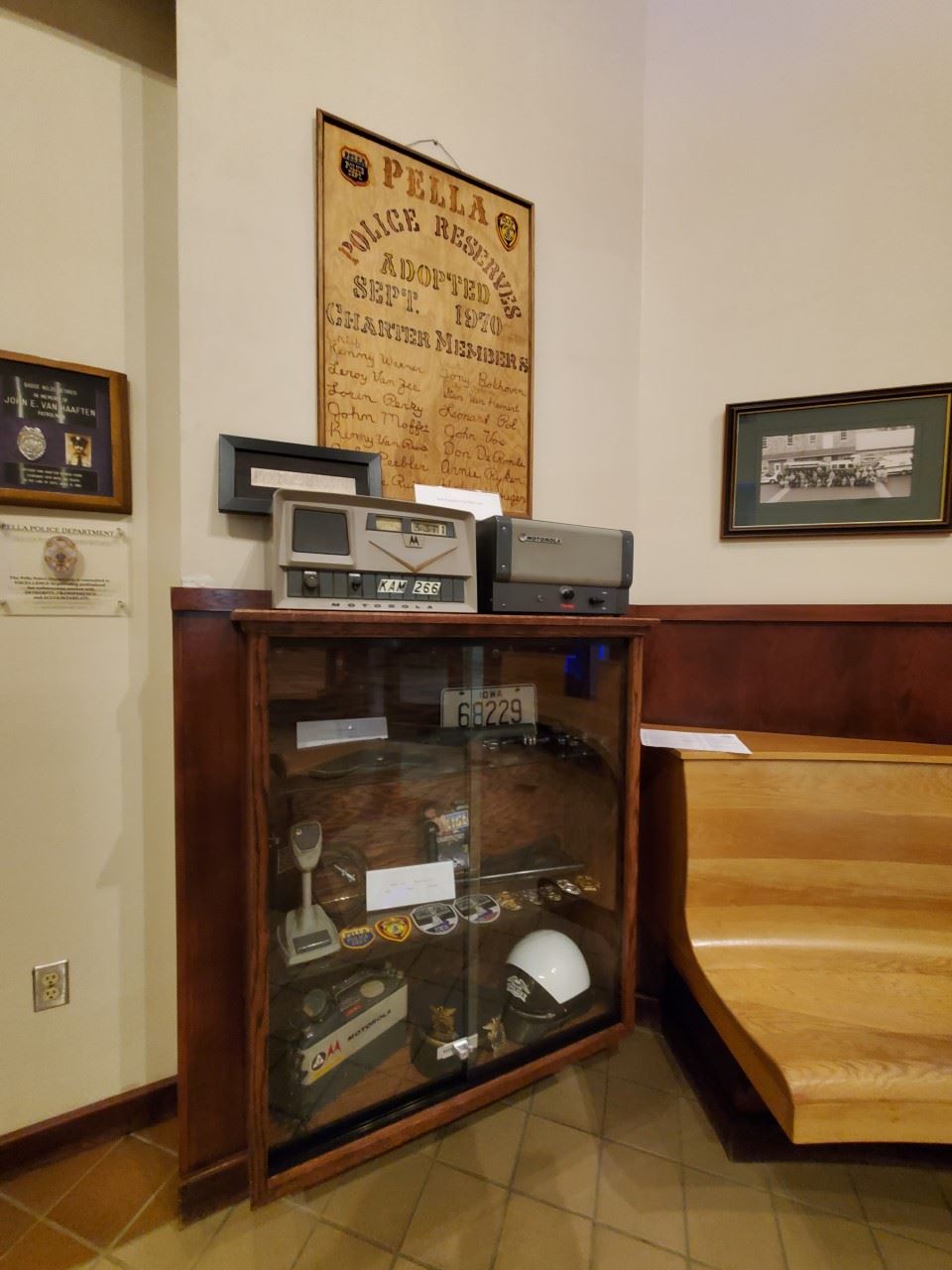 Reserve Officers have a passion for the City of Pella and law enforcement. This program is a wonderful way to give back to the community as well as gain valuable experience. The Pella Police Department occasionally hires new reserve officers, and these openings are posted on this website under job opportunities. 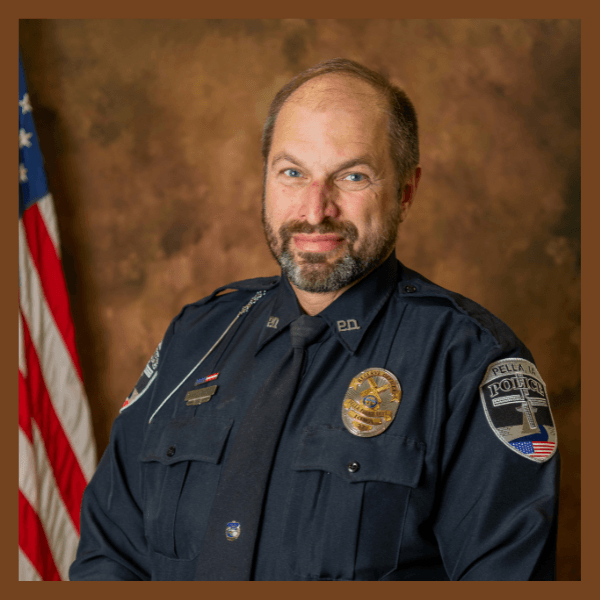 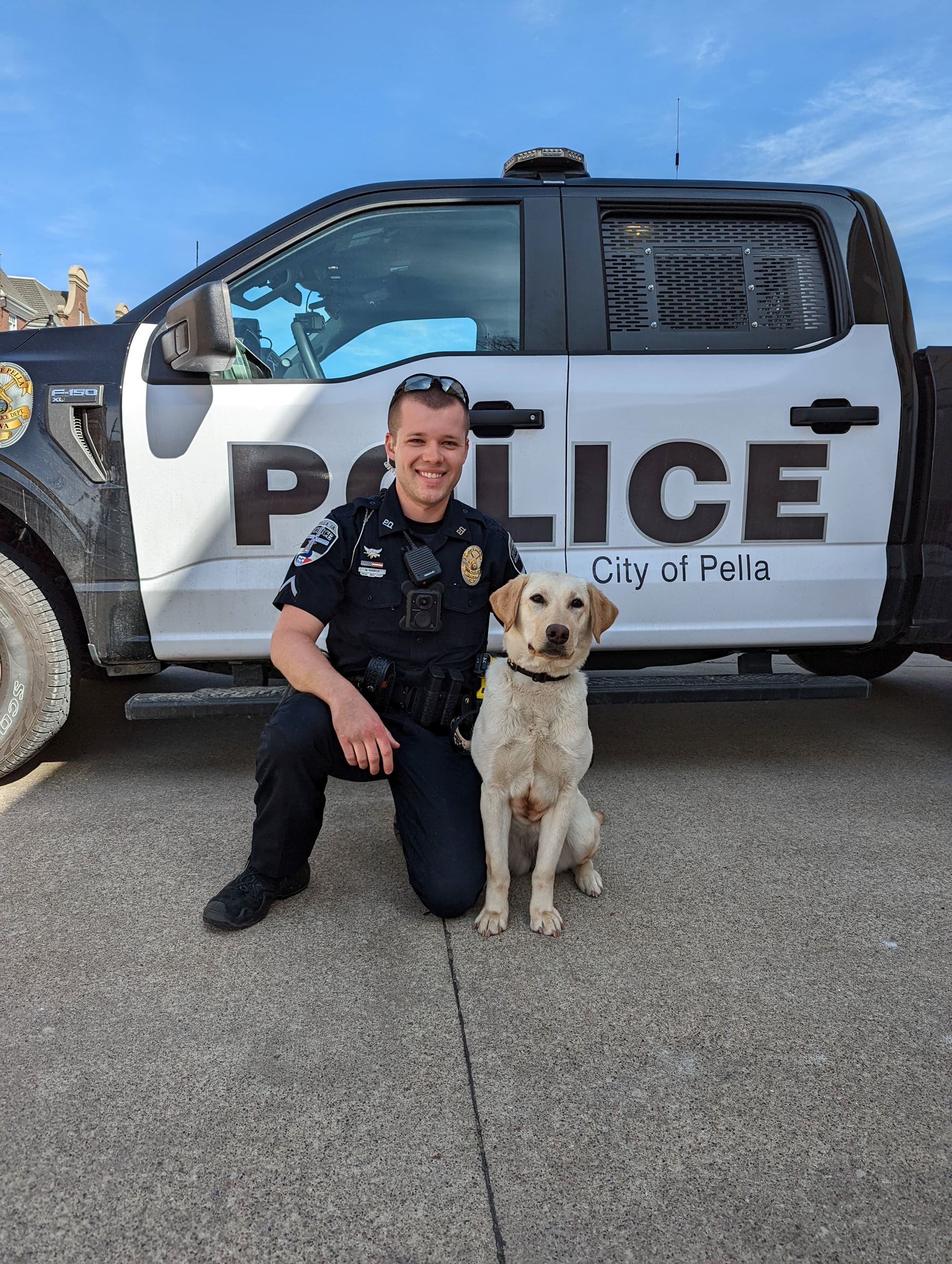 Ellie is a Yellow Labrador Retriever from Forest City, Iowa.

Ellie is trained for: