History of the Pella Public Library 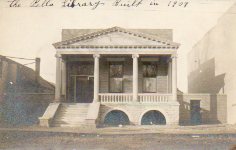 Carnegie-Viersen Public Library in 1909 The first meeting for an organized Public Library in Pella was on March 12, 1855 according to the First Daily Journal of Henry Peter Scholte, 1848-1855. It cost $2 for membership. He recorded receiving $6 for the Library and $2 for his own subscription. Thus, the library began with a "membership" of 4 people. The other three founding members remain unknown to this day.

On September 1, 1903 a group of 24 citizens met to discuss organizing a free public library. This resulted in the creation of the Pella Library Club, which was first housed in one room of the house of P.H. Bousquet, in the 600 block of East Washington Street. The first annual report listed the number of volumes at 1,424, borrowers at 200, and circulation (item check-outs) at 5,596. In 1905 a petition was presented to the City Council for the purpose of establishing a public library on its own plot of ground. Miss Siebertje H. Viersen gave land located on the west side of the public square for a library in honor of her father. Formal opening of the $8500 Carnegie-Viersen Library building was December 17, 1907. Andrew Carnegie gave $10,000 and Miss Viersen gave $6,000 for the purchase of books. By 1954, the total number of volumes had increased to 13,384, circulation to 31,444, and number of borrowers to 1,886. 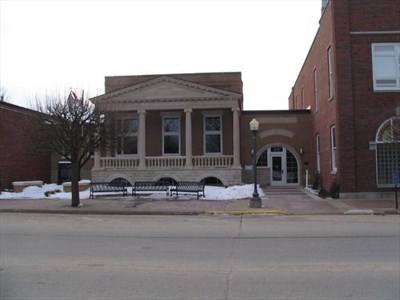 Pella City Hall today. Around 1940 the coal furnace was replaced by a gas furnace and the coal room was remodeled for the Board room. In 1957 a south wing was added to the library building. At this time the main floor became the Children's Room and the basement became the Periodical room. A second addition was added on the north side of the main building in 1977 and 1979. This provided a new entrance, office and work space. The remodeled basement became the Children's Library. An elevator provided access to both floors and the entrance. The total cost for this project was around $225,000. Funding came from bonds, City Council provision, local foundations, and community support. The Friends of the Library organized in 1977, assisting in making the community aware of the needs of the library.

By 1986, the Carnegie-Viersen Public Library had grown to have a total of 32,000 volumes and a circulation of 113,000. The current building was quickly becoming cramped and overcrowded, which made it less efficient. In 1989 a needs assessment was presented to the library board and capital improvements subcommittee of the city council. The city council approved the recommendation for a new facility, and plans began for raising funds and locating a site as well as the preservation of the current building. In August of 1994, the City of Pella purchased the property of Third Reformed Church on the corner of Main and Union, and took possession of it on December 31, 1997. This is the site the city ultimately chose on which to build a new library. 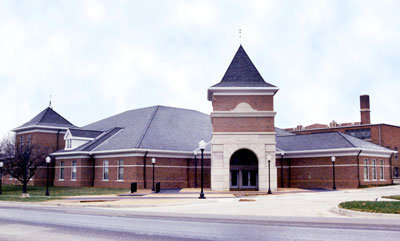 Pella Public Library today. A bond issue for a new library went to a vote on May 20, 1997. The projected costs were $5.1 million: $3.36 million would come from the bond issue (a portion of which would be used to renovate the existing Carnegie-Viersen building) and $1.74 million would be raised through private donations. The bond issue passed and construction of the new library began in 1998. The new Pella Public Library was opened on October 31, 2000.

During construction of the new library, the catalog and circulation system were converted to an automated computer system. The current library houses a Heritage Room which has an extensive genealogy collection. The Heritage Room has been utilized often by the large Dutch population as well as any others that have ties with Pella. By 2013 the number of volumes in the library had increased to 84,937, and the library had 13,001 card holders. In 2012 to 2013, the library recorded 266,676 checkouts and 126,134 visits to the library.